By Stefano Fontana September 1, 2012 No Comments 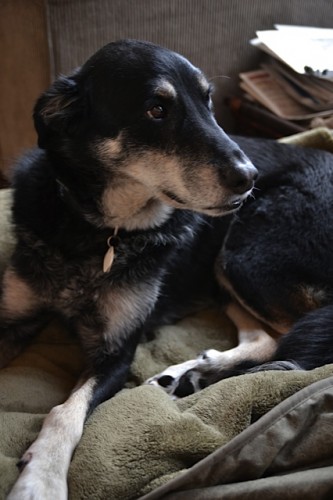 In 2004, we were volunteer dog walkers at the Vancouver City Pound.  We had just moved into a house with a backyard so were thinking about adopting a dog but we hadn’t met “the one.”  One night after walking the dogs, my husband Pete came home with an adoption application as a new dog had just arrived who he had fallen in love with. We had to wait the 2 week waiting period before we could bring her home.   She was very thin but so happy to be with us, she didn’t sleep for 2 nights!  About a week later, we found out we were pregnant with our first child, and have since had another as well.  Nova is a gentle, protective and amazing family dog!  We can’t imagine life without her.
In late August, we had Nova’s wonky foot fixed at Oak Animal Hospital.  We learned from Randy that she had been stepped on as a puppy by her previous abusive owners.  Her pain in that leg was getting increasingly worse so we opted to do the surgery, despite a long healing time.  She is recovering nicely, and will hopefully have a pain-free winter!