By Stefano Fontana March 1, 2015 No Comments 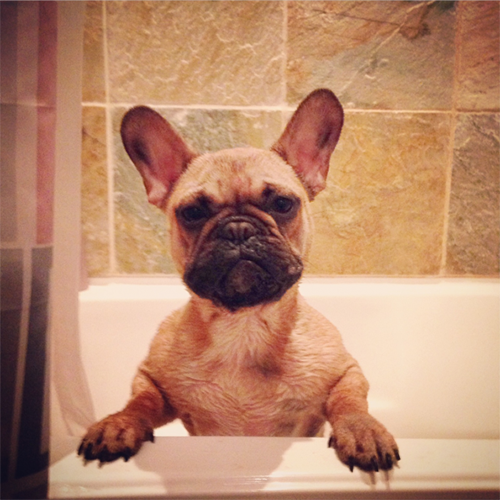 March’s patient of the month is ‘Jackson’ Neufeld, he is an 11 month old Tan
coloured French Bulldog. He is a super happy sweet guy who bounces with joy
whenever we see him. He was brought in recently by his mom as he was having
areas of hair loss and itchy skin.
After a thorough physical exam and a skin scraping test where some fur and
dead skin cells are observed under the microscope, he was diagnosed with
Demodex mange.

There are two main mites that cause disease in dogs, one being demodex and
the other being Sarcoptic mange (also known as scabies). Demodex is
naturally occurring on most species even on humans but can get out of hand
on young, old or immune compromised individuals. Sarcoptic mange unlike
demodex is extremely contagious from one dog to another.

Demodex is often treated by giving ivermectin injections on a weekly basis
until no more mites are detected. Supporting your dog’s immune system and
boosting overall health is a big part of treatment. Ruling out any
underlying health conditions is important as well as a pet with a lowered
immune system can have a harder time keeping demodex numbers under control.

Jackson has remained positive throughout his treatment and his mom reports
that his itchiness is much improved.