By Stefano Fontana April 1, 2014 No Comments 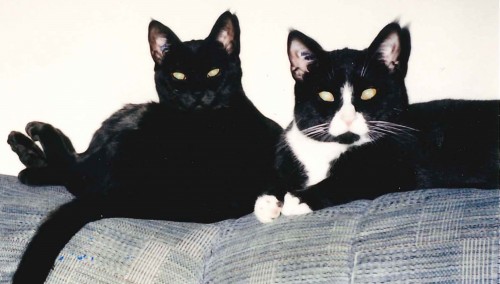 April’s patient of the month is ‘Orlando’ Kinsman he is a super sweet  natured fellow. He is an almost 14 year old black and white kitty. He has been a  patient here for over 7 years and recently was diagnosed with Chronic Renal  Insufficiency and Aplastic Anemia. Many cats will developed some sort of kidney insufficiency later in life,  kidneys are responsible for removing harmful waste such as urea and fluid from  the blood and turning it into safe urine that can be excreted from the body.
Aplastic Anemia is when bone marrow is not producing enough blood cells. He  was so anemic during his hospitalization in February that he had a blood  transfusion to get him stabilized and now has epogen injections that stimulate  the bone marrow. Orlando was in rough shape and through the determination of his owner and  the Doctors and staff here at Oak Animal Hospital he has made a remarkable  turnaround and really has responded amazingly to treatment.
We applaud his owner for her willingness and determination to do whatever  it takes to take care of Orlando, she has also educated herself and continues to  learn about his conditions and the medications he is on. Orlando is one lucky kitty to have such an amazing and committed human!