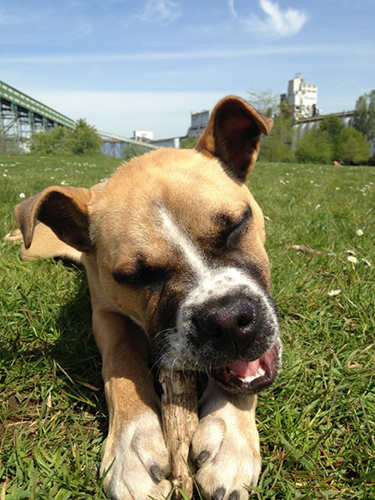 May’s patient of the month is Dexter Cheung, he is an adorable 5 month old Pug mix.  He was brought in recently by his mom Gloria as he was bitten by a dog at the dog park and had some bite wounds on his face. Luckily his wounds had stopped bleeding on their own and were not too severe so he was able to go home the same day with some antiseptic cleaner and some topical ointment.

Now that it is getting warmer outside the dog parks are a great way to enjoy time with your dog while letting them socialize and exercise. With all the fun to be had at the dog park there are unfortunately some risks as well. It is important that your dog is up to date on their vaccines, on a regular flea prevention as well as are dewormed regularly. It is hard to control the behavior of other dogs but keeping an eye out for signs your dog may be uncomfortable with an interaction or making another dog uncomfortable may help prevent a possible fight or bite incident.

Some tips for the dog park:

Monitor your dog’s body language and the body language of other dogs he or she is interacting with, being prepared to separate the two if needed

Refrain from bringing intact, pregnant or dogs in heat to the dog park

Correct your dog if they are exhibiting dominant behavior such as mounting or remove them from the situation if another dog is mounting them or playing too roughly.

In Dexter’s case he is a pretty mellow fellow but being a puppy sometimes unfortunately means being bullied unfairly. We are happy he is not mentally scarred and was not hurt too severely. His mom says he was un-phased by the attack. It goes to show you he has a great attitude. We look forward to watching him grow up.