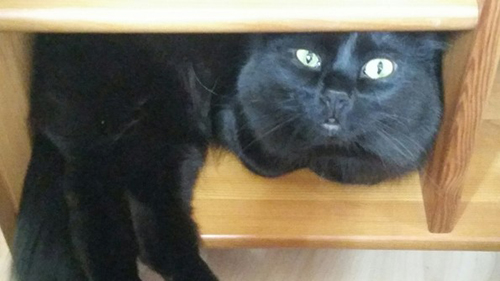 June’s patient of the month is ‘Loki’ Wilwand. He is a two year old black Domestic Shorthaired kitty. He was brought in by his mom Shawna as he was urinating in inappropriate places.  After a thorough exam we sent off his urine for testing. The Urinalysis results showed struvite crystals present in his urine. The presence of crystals in the urine can be quite serious as they irritate the bladder and can become lodged in the urethra  and block urine from being eliminated. If unable to urinate the waste products reabsorb into the body causing toxicity which is life threatening. Blockages are more frequently seen in males due to the longer and narrower urethra.
In Loki’s case he was still urinating without any discomfort so he did not need to be hospitalized.  Loki’s condition is being managed at home with a specialized diet.  He is on a diet specifically formulated for dissolving crystals and reducing the chances of crystal formation.  Some things to consider for your cat to help prevent crystal formation would be increasing hydration, increased activity and the use of specific diets that control urinary ph. Hydration can be increased by offering wet food, introducing a kitty water fountain or offering water in cups or other containers your kitty finds appealing. Activity and exercise can be increased with the use of toys, sometimes moving the food to another floor in your house gets your kitty moving on the stairs.  Medi-cal and Hills both have many Veterinary diets that maintain urinary PH to help avoid formation of crystals.
Shawna adopted Loki from VOKRA (Vancouver Orphan Kitten Rescue Association) when he was 6 months old, he was with VOKRA for a while as black cats have lower chances of being adopted. He chose her by softly running his paw on her face right after meeting her and she could not resist.  Loki is very sweet natured and was amazing with us.